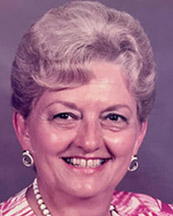 Betty was born February 21, 1935 in Red Bud, Ill. a daughter of Oscar W. and Frieda (Heller) Mennerich, who both preceded her in death.

She married Roland Lee Wagner Sept. 7, 1957, at the Peace Lutheran Church in Chester. He survives in Chester.

She was also preceded in death by a brother: Arthur Mennerich.

During World War II, the family lived in Alton and Hartford, Ill. and then moved to the Chester area.

Mrs. Wagner was a member of the 1953 Chester High School graduating class and was chairman of the many reunions held by that class.

After three years of employment in St. Louis, she married Roland Lee Wagner Sept. 7, 1957, at the Peace Lutheran Church in Chester.

They settled in Chester along with their son Ronald and daughter Rhonda. During their years in school, she attended all their sporting events.

She then accepted employment with the Illinois Security Hospital and transferred to the Menard Psychiatric Center, where she retired after serving as the Administrator’s Executive Secretary for twenty years.

Mrs. Wagner served on the Chester Board of Education for ten years, was a Ward 3 Alderperson on the Chester City Council and was the first Beautification Chairman for the City. She served as the 1995 Randolph County Bicentennial Beautification Committee Chairman. She was a past member and President of the Memorial Hospital Auxiliary and was quite proud of the funds raised by that organization for the purchase of additional equipment for the hospital.

In 2014, she sought state funds to repair the Governor Shadrach Bond Monument located in Evergreen Cemetery which suffered storm damage in 2008. When no state funds were available, Betty helped organize a private donations campaign. Funds from the Chester Tourism Commission and Save Illinois History helped complete the project. A rededication ceremony was held Sept. 21, 2014, and Governor Bond’s great grandson, Robert Hale, from the State of Washington was in attendance.

She was a past member of the Chester Tourism Commission and served as a tour guide for the river boat passengers for many years.

Betty was a member and past president of the Chester Women’s Club and was named Woman of the Year in 2004.

She was a member and past president of the American Legion Auxiliary Unit 487 and attended many State and National Conventions representing that Unit.

Betty was a member of the Chester Red Hats, the Randolph County Genealogical Society, and the Missouri Civil War Museum. In 2017, she was named the Chester Chamber of Commerce Citizen of the Year.

Mrs. Wagner enjoyed golf for many years, along with bowling, traveling, going to concerts, attending programs at the Chester Library, and being with family and friends.

Visitation will be 4-8 p.m. Friday at the Pechacek Funeral Home in Chester and 9-10 a.m. Saturday at Peace Lutheran Church in Chester.

A funeral for 87-year-old Betty Jean Wagner of Chester will be held at 10 a.m. Saturday at the Peace Lutheran Church. Dr. Mike Fogerson will officiate.

Interment will be in the Paradise Cemetery in Steeleville, Ill.

Memorials may be made to the Chester Public Library and the St. Louis Shriners Children’s Hospital.