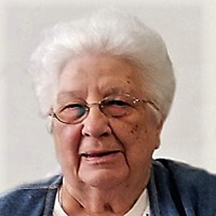 She was born January 19, 1928 in Chester, Ill., the daughter of August and Anna (nee Jany) Marcinkowska, who both preceded her in death.

She was also preceded in death by her husband of 55 years, James C. “Jimmy” Blechle, three sisters: Verona, Florence, and Anna Marie, and four brothers: Bud, Bob, Charlie, and Roger

Bertha Mae was a lifelong member of St. Mary’s Catholic Church, and the Postmistress for Menard Correctional Center for many years, tireless worker for the Knights of Columbus and V.F.W. Auxiliary, member of St. Mary’s Council of Catholic Women (Blessed Virgin Mary Sodality), and member of the Piecemakers quilting organization.

She was active in many Chester civic activities, such as working many hours making the Cohen House the beautiful home it is today. In 1975, she was honored as Chester Citizen of the Year. She was part of the committee that started the Popeye Picnic, and she was very active every year thereafter making the picnic a great success. Years later, she was honored for this work by being one of the Popeye Parade Marshals. She also served as a Chester Chamber of Commerce Director. Bertha Mae was one of the founders of Christmas on the River. In later years, the founders were honored by the Chester’s Annual Christmas Concert being dedicated to them for their work on this event.

She was well known throughout her hometown as a “do-er”. She was dedicated and committed to her church and her community and was never too busy to take on a new project or to see another one through to fruition. She was also known as a cook extraordinaire and was happiest when she was in the kitchen and visiting with her many family members and friends.

A funeral for  94-year-old Bertha Mae Blechle of Chester will be held at 11 a.m, Tuesday, May 24, 2022 at the Pechacek Funeral Home in Chester, Illinois. Father Steven Pautler will officiate.

Interment will be in the St. Mary’s Catholic Cemetery in Chester, Illinois.

Memorials may be made to the St. Mary’s Catholic School.