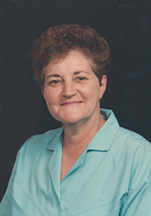 A funeral will be held Thursday, May 5, 2022 for 85-year-old Patricia H. Ross of Sainte Genevieve

She was born January 2, 1937 in Kaskaskia, Ill., the daughter of Raybern Montroy; and Maria (Buff) Montroy who both preceded her in death.

She married Joseph V. Ross Jr. He preceded her in death.

She was also preceded in death by a son: Todd Marion; a brother, Ronald Montroy; and two step grandchildren.

A funeral for 85-year-old Patricia H. Ross of Sainte Genevieve will be held at 10 a.m. Thursday, May 5, 2022 at the Basler Funeral Home. The Clergy will be Rev. Edward Nemeth.

Burial will be at Immaculate Conception Catholic Cemetery in St. Mary, MO

Memorials can be made to Valle Schools Foundation

She was a member of VFW Aux.  Pat was a resident at the Ste. Genevieve Care Center and she loved the staff, treating them as family.  She loved the friendships she made there and Pat will be missed by all who knew her.

Online condolences can be left at www.baslerfuneralhome.com.