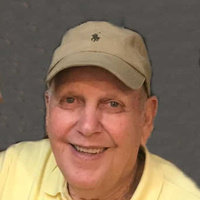 He was born January 28, 1942 in Ruma, Illinois the son of Edward and Frieda (nee Schlemmer) Kueker who both preceded him in death.

On August 6, 1966, Ollie married the love of his life, Janet Droste. They were blessed with 55 years of a loving marriage.

They began their lives together residing on Fish Lake Road, where they enjoyed life on the farm and began exploring their future together. Some of their best memories together could be remembered on the river cruising on the boat, riding in the jeep, or at the beach with a margarita in hand.

They ultimately chose to settle down in Ruma, Illinois, where they spent the rest of his years making loving memories.

Ollie worked as a concrete truck driver for Roger’s Redi Mix in Ruma. Although this seemed to be a tough occupation, Ollie enjoyed being able to get out and socialize with anyone and everyone. Constantly making new friends and spreading his positivity however he could. He proudly worked there for 38 years before retiring in 2004.

Ollie was a member of St. Patrick’s Catholic Church in Ruma. He spent most of his free time boating, hunting, and socializing with neighbors, friends and family. Later in life he enjoyed keeping up with his beloved lawn and landscape as well as catching any Nascar race he could on television.

Out of all the things that brought Ollie joy, his family always brought a smile to his face. Whether it be a back road cruise with his son watching the deer or simply watching his grand kids as they play in the yard; he always gave a smile and a thumbs up. True to his nature, even in his sickened days his main concern was of nothing else but his family.

He was a man who was always willing to lend a helping hand and could speak to almost anyone he met, like he had known them for years. Whether he was in his hometown or halfway across the country, he never met a stranger.

For his family and those who loved him, his loss is unimaginable, but as he would always say “It’ll all work out”.

It was Ollie’s wishes to be cremated.

A memorial service for 79-year-old Oliver “Ollie” Kueker of Ruma will be held at 3 p.m., Saturday, December 11, 2021 at the Knights of Columbus Hall in Evansville, Ill. A meal will follow the service.

Memorials may be made to St. Patrick’s Catholic Church, Ruma, Illinois or the David M. Sindelar Cancer Center.