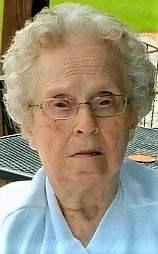 She was born August 23, 1926 in Weingarten, Mo., a daughter of Raymond J Jokerst and Rose (Miller) Jokerst, who both preceded her in death.

She was also preceded in death by a son: Duane M. Donze; a sister: Bernice (Ralph) Rodenmeyer; a granddaughter: Nichole R. Gegg; and a sister-in-Law: Armella Donze.

Burial will be at Valle Springs Cemetery.

Memorials may be made to Sainte Genevieve Catholic Church or to Crown Hospice.

She was a member of the Church of Sainte Genevieve and the VFW Auxiliary.