JEFFERSON CITY, Mo. – The Missouri Department of Conservation (MDC) posthumously honored Joel M. Vance, formerly of Russellville, by inducting him into the Missouri Conservation Hall of Fame on June 17 during a ceremony at the MDC Runge Nature Center in Jefferson City. Vance died on Dec. 9, 2020, at age 86. 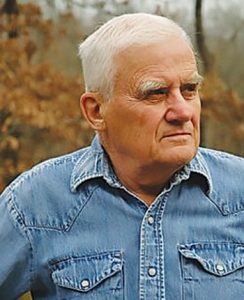 Vance was nominated for the Conservation Hall of Fame by family members, who accepted the award in his honor. They included his wife, Marty; his sons, Eddie Vance and family, J.B. Vance, and Andy Vance; and his daughters Carrie DeValk and family, and Amy Binkley and family.

Vance is the 45th inductee into the Missouri Conservation Hall of Fame. The award honors deceased citizen conservationists and former employees of MDC, other conservation-related government agencies, universities, or organizations who have made substantial and lasting contributions to the state’s fisheries, forestry, or wildlife resources. To be eligible, an individual must have performed an outstanding act or demonstrated dedicated service resulting in major progress in conservation in Missouri. Nominations are carefully screened by a diverse committee and their recommendations are presented to the Conservation Commission for consideration and final approval. Learn more at https://mdc.mo.gov/about-us/awards-honors/hall-fame.

“Over the decades of his employment with MDC from 1969 to 1991, Mr. Vance contributed to the Department by being the highly respected and widely heard clarion voice of conservation in the state, giving talks on behalf of the Department, conducting seminars and workshops, and helping establish a Public Affairs section for MDC in 1986,” said MDC Director Sara Parker Pauley during the award event.

“Most notably, he wrote the Design for Conservation which established a dedicated sales tax for conservation in 1976,” Pauley added. “The entire issue of the August 1975 Missouri Conservationist was written by Mr. Vance, detailing the program that would propel MDC to the top of all conservation agencies nationwide.”

Pauley noted that writing the Design for Conservation created a framework for conservation funding in Missouri and emphasis of the sales tax, but the bulk of Vance’s career with MDC included writing about, photographing for, and participating in conservation efforts for the monthly Missouri Conservationist magazine.

“These mentioned efforts only hint at his significance to the North American conservation movement,” Pauley said. “In addition to thousands of news stories and magazine articles written for the Department, Mr. Vance produced an abundance of freelance articles and monthly columns over his 60-year career for every major hunting, fishing, and conservation magazine in America. His work earned him numerous, well-deserved awards and accolades.”

Vance also authored many books about conservation topics all of kinds, which showcased his wit, humor, and love of conservation efforts.

“With Mr. Vance’s passing, Missouri lost a dedicated conservationist,” Pauley said. “However, his legacy lives on for future generations of Missourians. We are pleased Mr. Vance’s family could be with us today to accept this honor on his behalf. I want to personally thank them for supporting him in his efforts to make Missouri and the nation a better place for future generations.”